From the Leaning Tower of Pisa to Mo i Rana 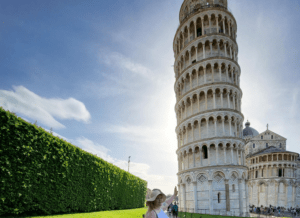 In recent months, The Coring Company has been widely discussed in the media, both locally and nationally. After two years of development, the company has recently launched its first product, the Sample Control System, and gained its first customers. Many have probably wondered a little about the company’s background. We talked with founder and CEO Frida Vonstad about how it all started.

The beginning of Frida’s journey has been filled with both ups and downs. She has worked hard to achieve her goals. The story begins when Frida, in 2013, after working for a period in a kindergarten in Mo i Rana, found that she wanted to challenge herself. She had thought for a long time that she wanted to move abroad and get a higher education and found that now was the time for this.

The founder says she has always liked to bet as high as possible and therefore wanted to apply to recognized universities. The choice thus fell to University College London (UCL) and Oxford University.

“I wanted an education and skills that could make a difference, that didn’t end up gathering dust on a shelf. This led to going to the industry in an early phase to hear what needs they had and what challenges they wanted solutions for”.

One of the things Frida experienced early on was the large amount of duplicate work that was being conducted when it came to ground investigations. Already at this point, she was motivated to find a solution.

“I contacted Professor (emeritus) John Burland, who has somewhat of a god status within geotechnical investigations. Or really, I spammed his entire team until I got a meeting with him, which I think he only accepted to get rid of me,” Vonstad laughs.

After this, Burland was a significant supporter and inspiration for the research work that followed.

“Just the fact that I got office space with him, and access to his library, which was overflowing with relevant specialist literature, gave me good conditions.”

The work Frida took part in with the Leaning Tower of Pisa illustrates the basic idea of ​​the solution The Coring Company has developed.

“Steel pillars were supposed to be put down to keep the construction stable, but there is a historic burial ground underneath the surface. A challenge then arises between having to stabilize the construction and being able to preserve the historical values ​​below ground, which is the entire core of the problem we are solving. It’s about looking after the interests of all the various professional fields within ground investigations”.

One of the entrepreneurs’ first challenges was going straight from a bachelor’s degree to an industry-based doctorate. It is not standard to go directly to a doctorate, so the university had to be convinced. Fortunately, Frida had the support of the industry, which also wanted a solution – thus, the university agreed that she could complete her doctorate, but she had to arrange funding and research partners herself.

“Having to get funding and test subjects was a small entrepreneurial journey in itself – but I took the challenge head-on,” says Vonstad.

Norwegian collaboration partner in the doctoral work
One of the projects Frida got involved with during her doctoral research was the “Ferry-free E39 project” at the National Road Administration. Borehole samples were extracted and analyzed around the fjord at Tysnes outside Bergen in connection with this project.

“When something new is being built, thorough investigations are carried out by geo-technicians and archaeologists, respectively. Suppose there had been a collaboration between disciplines/roles in the project. In that case, actions could be taken to protect archaeological discoveries at an earlier stage and thus avoid costly delays later in a construction project. Today, several index tests are carried out using the same method by both disciplines, and my project sheds light on how the tests that overlap can be combined for less sampling and more collaboration. In addition, we can prevent knowledge important to one another from being lost,” explains Vonstad.

“It became clear that by adopting the interdisciplinary testing framework, both time and costs are reduced when testing borehole cores. It also reduces risks associated with groundwork, and there is a reduction in the amount of material required to get results from the test material,” says Frida.

The impact of the pandemic
In the middle of Frida’s doctoral work, there were delays due to the pandemic, leading to the university being closed. It became difficult to carry out the testing of the last data set for the doctorate.

“All the test material was locked up at the university, and it took a long time before I got access to it again,” says Vonstad.

On the other hand, the fact that the university closed down offered further opportunities. It gave Vonstad time to think about what she could do with her research. Frida says that in the summer of 2019, she and Geir Tore (co-founder and father) discussed the various opportunities that had arisen, including the interest from NASA and the space community. Frida had presented her research to the Space Resources Roundtable earlier that year and received a research award for the potential linked to in-situ Research Utilization (ISRU).

After attending the Symposium in the USA, it became clear that NASA was very interested in Vonstad’s research, and they offered her a job. But the entrepreneur still felt how important it was for her that the research would make a difference for more than one company. Thus, Frida ended up turning down the job offer from NASA. To make the research available to as many people as possible, Frida realized that she should start her own business.

Establishing The Coring Company
For Frida, it was only natural that the company should be founded in her hometown, Mo i Rana. In October 2019, The Coring Company was established, and Frida can say that in an early phase, it was pointed out that she would probably have to extend the timeline concerning all the plans for the company.

“It was not feasible to work with all the different markets at once, and luckily there were several people I could get advice from when it came to developing a business,” says Vonstad.

Among other things, she participated in the Arctic Accelerator (2019-2020) and became one of three winners in Angel Challenge Norway in 2020. Both of these programs provided a lot of good learning and knowledge. Oddmund Aasen, who now sits on the company’s board, became a mentor already at the first gathering at Arctic Accelerator. Our chairman, Trygve Jacobsen, comes from Angel Challenge.

“Trygve’s wife has said that I talk to him more than she does,” says Frida humorously.

Although the entrepreneur has received a lot of good help along the way, there have also been challenging events. Among other things, in an early phase, they were in contact with an investor who was only interested in buying us up to sell us on to another company.

“During that period, the company was on the verge of going under,” Frida admits.

Nevertheless, Vonstad can say that one of the things that stressed her the most was when Geir Tore quit his secure job and was going to start full-time at The Coring Company, and this was before the company had any funds available.

“Fortunately, it didn’t take long before the first financing was in place, and very loyal and great investors came in,” says Frida.

From development to launch
The company has 20 employees and launched its first product, the Sample Control System (SCS), in May 2022.

“It was astonishing to see how much time was spent on waiting and logistics, but also how little utilization of data across the disciplines. I immediately saw that there had to be a better way to do this. The Coring Company now delivers a digital solution for the industry that can reduce risk, time, and costs for customers and construction companies,” says Frida.

The entrepreneurial journey has brought ups and downs, but now the company has employees with solid expertise and secure investors. Later in 2022, a solution for the mining industry will be launched, and there will be additional projects and products as the company advance.

“It is also wonderful that we have brought in several local investors and partners who can contribute to us reaching the goals set for the company. Although the development plans and timeline are more realistic now than they were in the start-up phase, we still have huge ambitions for the time ahead, ” said Frida smiling.

Mo i Rana, November 2022 – The Coring Company is a Norwegian tech company developing digital solutions for the contractor- and mining industry. Earlier this year, the company

Fra det skjeve tårn i Pisa til Mo i Rana

More news
The Coring Company AS

Privacy Policy
Cookie Policy
Manage Cookie Consent
To provide the best experiences, we use technologies like cookies to store and/or access device information. Consenting to these technologies will allow us to process data such as browsing behavior or unique IDs on this site. Not consenting or withdrawing consent, may adversely affect certain features and functions.
Manage options Manage services Manage vendors Read more about these purposes
View preferences
{title} {title} {title}